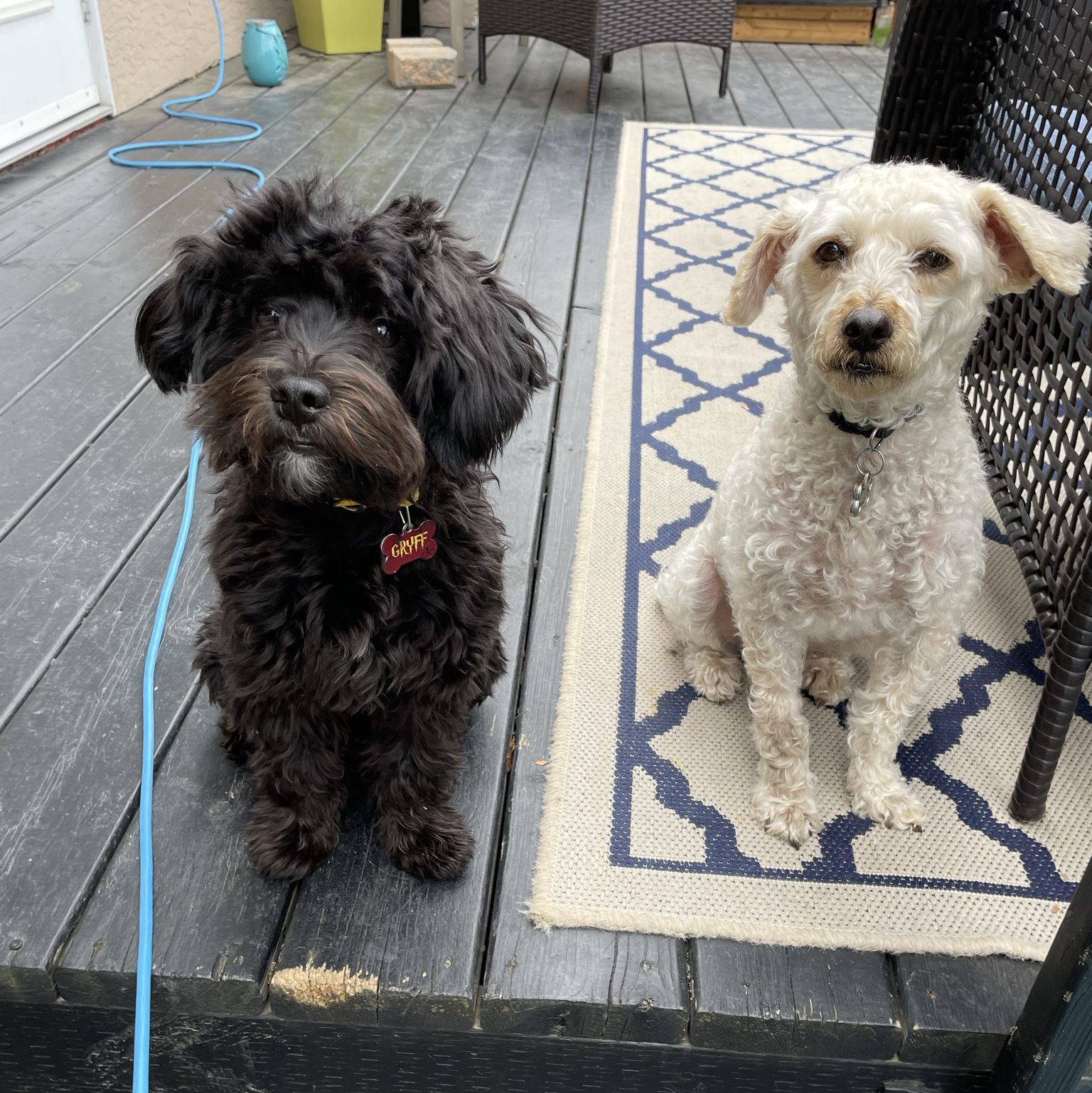 About two and a half months ago, I decided to take on a project to teach myself how to train my dogs in order to improve their behaviour. At the time, Duke (6 years) and Gryff (5 months, now approaching 8 months), were frequently demonstrating that they were in need of some manners. They were awful at jumping all over everyone that came in the door, while simultaneously attacking each other (mostly Gryff) and horrible for pulling on a leash and making walks so unenjoyable. I set out with the goal of improving these two behaviours! The result … well let’s talk about that!

September 20th, 2021 ~ I began by outlining their annoying behaviours, the reasons for choosing this as my major learning project and the opportunity that this project would create for my family to be involved.

September 28th, 2021 ~ I explored an app I did not have – TikTok – and discovered the learning potential that exists within it, despite it’s many flaws. While I set out to learn more about it with no intention of getting it, TikTok would become a big part of my major learning project from this point forward.

October 3rd, 2021 ~ During the first few weeks of this project, I spent most of my time looking for and exploring resources on Instagram, Facebook, Twitter, YouTube and TikTok. I had intended to check Pinterest but never actually got there. I began organizing the resources I was finding on my Wakelet. As I was enjoying the approach of the TikTok videos, I started searching for some of the dog trainers I was following in other locations such as Instagram and YouTube to see if they had TikTok accounts. By this point I was starting to identify some who I like more than others and even unfollowing a few I had started out with. Following this post, Brittany mentioned Zak George and how useful she found his YouTube channel.

We also began trying clicker training and walking in the house during the first two weeks of October.

October 18th, 2021 ~ It is at this point that I started to realize a need for a more sequential approach to dog training. While I started out with the goal of improving their leash walking and how they react when people come to the door, more and more skills needed work. A big piece was realizing how essential it was for the dogs to attend to each of us. “Look at me” became an integral part of training at this point.

This is also the point I realized we may need to try some different leash and harness options. Duke demonstrated instant improvement with a front clip harness. Gryff has been much more resistant to the various harness styles and continues to try to pull. Colton shared the ‘half hitch harness’ hack as a solution for when you find yourself without a harness. This has turned out to be a useful way to maintain more control with Gryff as it gives him a slight squeeze around his core when he pulls too hard.

November 1st, 2021 ~ A few new challenges popped up in the week leading up to this. Gryff started marking in the house which had not previously been a problem. In addition, the barking was increasing, especially with the little one. At this point we had settled on the Halti leash and Canadian Pooch Harness. Soon after this, I also bought a 30 ft. lead to use specifically for training purposes.

At this time, we became much more consistent about expecting ‘four paws on the floor’ before providing the pups with any attention on entry. This is something we have to work hard on with company around while also encouraging the company to ignore them until they are ready.

This week I came across the Zak George 30 Day Perfect Pup Program. As soon as I saw the skills it was progressing through, I knew this was the more focussed and progressive approach I was in need of!

November 16th, 2021 ~ The main focus of the first few weeks of November were on trying to watch and keep up with all the resources from the free 30 Day Perfect Pup Program. I was finding Zak George’s approach to be both gentle and effective. At this point, both dogs were demonstrating ‘sit, look at me, lie down’ and beginning to leave it and stay. Throughout the program I was finding the message of consistency to be loud and clear.

I shared my Wakelet and Flipgrid this week, the hunt for low calorie treats and that I had signed up for a Bowzer Box. Progress was definitely taking place and we were beginning to feel some increments of success.

Where we are today!

In the weeks since the November 16th post, there have been numerous gains, challenges and changes.

I soon realized that Flipgrid was not going to allow the open sharing I was hoping for. In the classroom, this tool is very handy and its security features are wonderful. When trying to share with a broader network, they were very limiting. At this point I felt I had no choice but to transfer all the puppy training videos to TikTok and make my account public. This was tough for me as I had never intended on doing that. That said, I find it fairly simple to remove followers and keep the profile somewhat limited. I also had fun editing and improving the videos with the TikTok features. It is pretty cool how you are provided with music options and it is so easy to add them! I found myself playing around more and more with these tools. Initially I said I would be removing this profile as soon as I completed this class, but I think I may keep it up for a bit in order to keep me accountable to the puppy training that must go on!

During the last few weeks we have been working hard on adding ‘leave it’ and ‘stay’ to the dogs repertoire of commands. Gryff is responsive to hand signals and continues to need clear signals for “down” (lie down), “leave it”, “stay” and “come.” Duke has his moments and definitely struggles to focus when excited but that is to be expected. We have started to use the commands ‘sit’ and ‘stay’ when people come to the door including when I come home (this is always a big trigger). The boys have been doing very well with this. They still look like they may explode with excitement, but they are trying to follow the commands. We have been trying to allow one dog to come say “Hello” and then go before the other dog comes to greet me, but this part is continually tricky. We will keep working at it! I think I need to have treats by the door!

We are definitely not done the 30 day program from Zac George, but I think that’s okay. The next couple skills are really getting to what we set out to improve from the beginning. I knew they still needed more time on the skills we had introduced this month before we started. I also knew we needed to try taking our training to a new setting. Most dog trainers emphasize the need to learn inside and then move to new settings. They also recommend that the dogs have a chance to blow off some steam and acclimate to the environment before trying. We set out last Sunday with a plan to take the dogs for a walk and then head to the park and let them sniff around for a bit. Duke NEVER pays attention to me outside the house. It is beyond difficult to gain his eye contact or regain his attention once we head out the door. I often saying I could hold an entire drumstick in his face and I still could not get him to follow a command.

Well, these are just some of the reasons I was so extremely excited with the success we experienced at the park. We utilized the 30ft lead for the first time, looping Gryff’s leash around it so he could run freely with Duke. Once they seemed settled, I decided to try all the things we had been working on. I was completely shocked when Duke stopped and actually focussed on me! I was able to get them to “sit”, “look at me”, “stay” and “come” in the park!! Not only that, my youngest daughter was also able to gain their attention and give commands that they followed! In my mind, this is huge! There may not have been any other dogs around and the park was fairly quiet, but this was a new environment and we were able to carry over some of our learning!

Check out my TikTok to see all the videos including this one!

A few key challenges have come to light in the last couple months, but particularly over the last few weeks. First, as Duke’s leash walking behaviour has improved, it has also become more clear how anxious he is. Once I really started attending to how his behaviour changed from inside to outside, it made it easier to understand why he struggles to give us any attention or follow commands when outside the house. This is something we need to continue to look into.

I mentioned a few weeks ago that Gryff started marking in the house, beginning with my youngest daughters bed! After having so much success with his ‘potty training’ up to that point, this has continued to be a frustrating challenge. With some other odd behaviours appearing at this point in his growth (let’s call it puberty), it has been very clear that Gryff NEEDS to get fixed – bad! I started to wonder if marking might be another sign of this and sure enough, it is. Unfortunately, Gryff’s appointment is not until December 28th so we have a bit of a wait for this almost 8 month old pup. I cannot tell you how many times I have said “this is going to be a long month” in recent weeks! I am certainly hoping that we see some improvement in a few behaviours after he is fixed.

Last but not least, Gryff may be allergic to something! He has started to scratch obsessively and it is not just targeted at an area. With all the different treats we have been utilizing in the hunt for low calorie tasty treats, I have clearly introduced something that does not agree with him. We have tried eliminating a few of them to pinpoint what it is but the scratching continues and thus so does the investigation.

We may not have achieved the two goals we set out to improve, but we are making progress. The fact that I was able to get their attention and see carry over of skills in the park brings me such hope! That neither of them has bolted when I have told them to sit and stay because someone is at the door, is also a big marker of success. The fact that walking with them does not make me insane right now is also evidence of some improvement, even if it is a result of changes we have made. I am thankful for all of it!

We are not done! The process has not been perfect but it is working! Our puppy training absolutely must go on and I am totally okay with that. From this, I have realized that I absolutely can learn what I need to improve my dogs behaviour utilizing online tools, and if I continue on this progressive path with consistent training and reinforcement, we will achieve our two initial goals and much more!

Thank you for following our journey!!