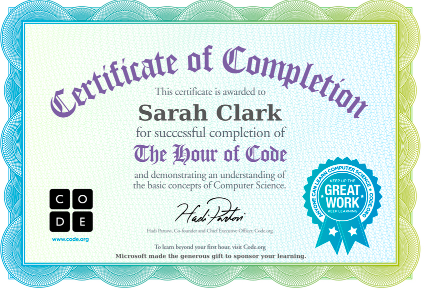 Coding with a Silent Teacher?!…

This week in EDTC300 we talked about coding. I did the Silent Teacher activity on hour of code. I found this activity to be especially interesting because it did not give any kind of instructions or hints to tell you what to do, it taught you through trial and error and repeating the same skills a few times before moving on. I thought this was interesting because a lot of coding and computer science is common sense and some of it you can follow just by looking at the code. It was a different approach to teaching, by just letting the students figure it out on their own instead of trying to explain every little thing. It is a common mistake in Computer Science to overthink it and make it much more complicated than it would normally be. I would be interested to know how someone with no knowledge of coding would do with the silent teacher activity.

Since I took computer science in high school, I fell in love with it, I learned some Java, Python and C++ and would love to teach it eventually. I have really enjoyed learning it and have continued to see the benefits of teaching it in the classroom. One of the main benefits of coding is problem solving, I learned this by experience when I was coding, I had to learn how to solve the problems I would encounter. One of the nice things about coding is that it is appropriate for almost all grades. You can teach block coding to younger students and eventually move into typing code when they are older. It is also important because there are lots of new jobs involving coding that didn’t even exist 20 years ago. With the new jobs, it seems logical to teach some coding in high school.