True Identity Within Self 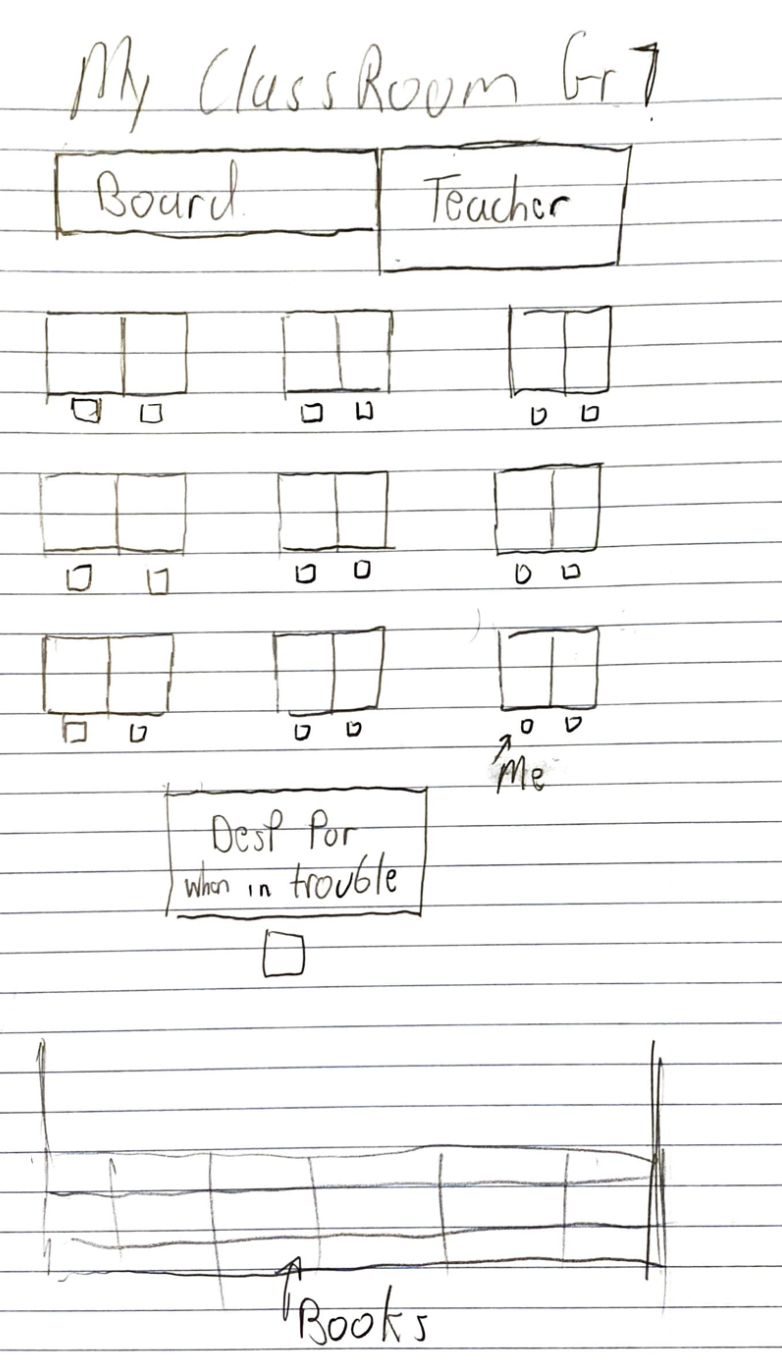 The structure of my learning environment throughout my education has been fairly similar. However, the relationship between myself and the teacher began to change. The drawing presented is the common classroom structure I commonly experienced. In my first few years in Canada, I was presented with such a classroom structure, which felt much more social than back home where everyone was separated in singular desks. However, after viewing Dr. Fatima’s lecture, I have come to realize the boundaries and structure of this classroom. I can recall being told that my seat was in the back of the classroom alongside my immigrant friend. I realized how the teacher’s favorite students and the ones who were picked to do all the tasks and demonstrate were all in the front of the class socializing with each other and the teacher. Meanwhile, in the back of the classroom, there were many foreign students who were not as involved in the classroom due to the absence of social skills. Nevertheless, all of us wanted to be involved and I always believed that for me to become more involved, I had to be more like the students in the front of the class, who all happened to be Canadians. Having said that, the classroom structure felt like a hierarchy and I felt limited to communicate with other students in the classroom. Like Dr. Fatima mentioned, students are minoritized and marginalized, which means they are hidden usually due to their differences of culture or special needs, something I experienced for a long time. However, as I began to dress and talk like the Canadian students, I suddenly felt more involved in the classroom and began to sit in the front of the classroom and become more engaged in the activities. Therefore, teachers need to avoid such experiences and make a more welcoming classroom with the space being equal for each student. Dr. Fatima mentioned how we as teachers need to erase the classroom hierarchy, and a solution that came to mind is having a teacher in the middle and desks surrounding. This would allow for all students to be at an equal distance from the teacher and allow for equality. Lastly, after the viewing of Dr. Fatima’s lecture and article, for me as a future educator, I believe it’s important for me to avoid the term “My” because everything is on loan to us and share with my students the spiritual connection to the land.

Education student at the University of Regina. Love to be active, usually at the gym or playing sports.

This definitely sounds like something everyone could use. Not many people enjoy reading anyways!! #edtc300 Audiblogs- A Tool That Turns Any Web Page into Audio Podcast http://feedproxy.google.com/~r/educatorstechnology/pDkK/~3/ri_zRR2yWTc/audiblogs-tool-that-turns-any-web-page.html #education #feedly

A very interesting article and different point of view. Worth reading! #edtc300 Why Health Care Needs to Be About Much More Than Treating Illness https://www.inc.com/video/why-health-care-needs-to-be-about-much-more-than-treating-illness.html

All these tools could be useful for everyone, especially our future students. #edtc300 250+ Tools to Unleash Your Creativity http://feedproxy.google.com/~r/educatorstechnology/pDkK/~3/uTsSXVqi-10/250-tools-to-unleash-your-creativity.html

I don’t think anyone likes ticks so here are some myths about them. Maybe some you thought were true, like I did. 8 Myths About Ticks https://lifehacker.com/youre-probably-going-to-get-a-tick-this-summer-good-lu-1793895235

I think both as future parents and teachers this article is important. Each person works different and this article touches great points. #edtc300 How to Understand Your Child's Temperament https://lifehacker.com/how-to-understand-your-childs-temperament-1847091345